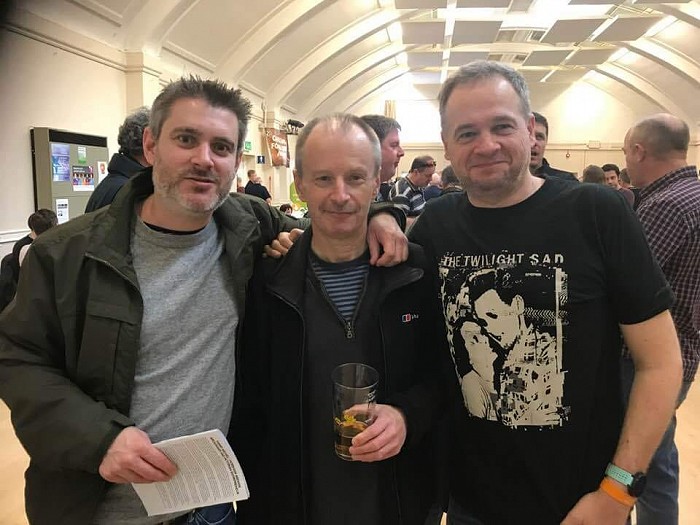 Above: Matt Ide, me and Roger Johnson at the Beer Festival

The Festival had a relaxed atmosphere in the Drill Hall and it wasn't too crowded. The Saturday afternoon tickets were £7 and the session was 11.30am to 4.30pm. Quite a session! Beer tokens were sold in strips of £5 each and beers cost between £2.80 and £4.00/pint.

Most of the beers at the event were arranged in two sections, light and dark, and each section was alphabetical. There was also a cider selection, "Stringer's Bar", and a small range of keg beers. Personally, I don't have a problem with keg beers at a festival but I imagine that some folks might. However, I like the alternative choice that they provide.

Here are the beers that I tried (tasting notes from the CAMRA festival beer list and programme).

As with every beer festival these days, the choice and variety was excellent. I don't have a favourite from the above because they were all great in their own way.

I missed out on the two beers of the Festival (as voted by other festival-goers) which were both from Cerne Abbas Brewery (Gurt Coconuts Rum Stout and Harlequin IPA). Oh well. I'll look out for them on my other beer travels.

If you haven't been to the Spring Equinox Festival, it's a great event with a fabulous choice of ales. Look out for next year's date!