A tour of Firebird Brewery 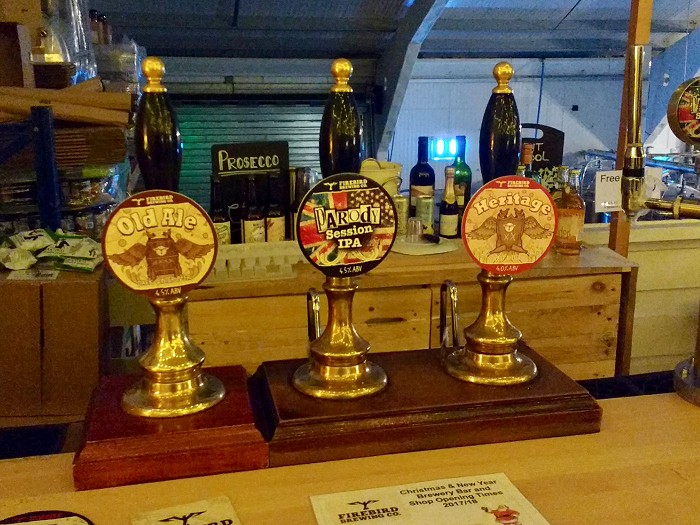 Firebird Brewery tours take place every second Tuesday of the month (tour times are 6.30 to 8.30pm) and cost £17. For that, you get unlimited beers with cheese toasties from Sussex Charmer (neighbours at the same location), a pint glass to take home, and a rundown of the brewing process. Oh, and 10% discount in the shop as well. Nice one.

My coworking colleagues and I booked a place on this week's tour and turned up at the brewery at 6.30pm and found ourselves with 20 or so other folks. Firebird Brewery has been open for four years now but I have to confess this was my first visit. Shame on me!

The brewery is in a new unit on the site of the old Rudgwick Brickworks (map) which is now a small industrial park.

The brewery is a medium-sized operation. Small by the standards of the multinational breweries but larger than a microbrewery. It has its own bar area in a mezzanine above the brewing vessels. This layout works really well and it was a great place to spend a few hours with some lovely beers.

Why Gordon Brown is a Beer Hero

On our tour, we were given an explanation of the brewing process by Richard Peters in an entertaining and informative presentation on the ground floor by the brewing kit. There was even a "little bit of politics" when Richard told us why the ex-Chancellor and PM, Gordon Brown, is a "beer hero". The reason: In 2002, he halved the duty on beer for small producers. That's been a big influence on the industry and sparked the craft beer phenomenon!

During the evening I tried three ales:

All in all, there were about six or seven ales I could have tried but the three I tasted were all great so I stayed with those.

Halfway through the evening, several trays of Sussex Charmer cheese on toast arrived. It's a tasty cheese and was the perfect snack to accompany the beers.

I plan to return soon!